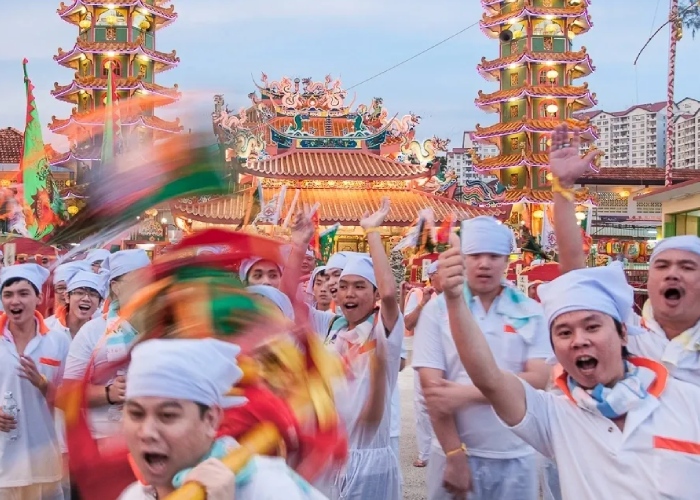 My explorations of traditions and festivals in Malaysia began at a Chinese temple in the community of Ampang, Kuala Lumpur, in 2006. The first time I watched the elaborate fire walking ritual during the Nine Emperor Gods Festival, my curiosity was peaked. How could I resist a festival that was designed to bring the cosmos into balance?

Never privy to the male-dominated mysteries of some temples, I none-the-less came to know the rituals and devotion to the festival very intimately. I began blogging in 2010, sharing my images and insights with the community and telling stories of dedication and belief.

The Nine Emperor Gods Festival is one of the most important events on the Chinese calendar in Malaysia. The festival takes place annually in the Ninth Lunar month, for nine days when the nine Emperor brothers descend from the heavens. The Taoist festival is genuinely Malaysian, with roots in the arrival of Chinese miners in the mid-nineteenth century. Those who worship the emperors believe that the forces of yin and yang will answer their prayers for health and prosperity. The festival is now a marvelous combination of the sacred and the profane. Traditional rituals are organized with reverence and secrecy within an otherwise carnival atmosphere.

Over more than a decade, I visited temples in many parts of Malaysia to witness the various ways that the Nine Emperors were worshipped. If you are curious, there are 10 years of blog posts in the archive found here. If you have time for just one, try Nine Reasons, for an introduction to the joys of the archives. I also created an installation of some images on the street, at George Town Festival in 2014. I welcome you to explore and discover.

Small Sacred Spaces along the Street

October 21, 2019
When the Nine Emperors Gods are invited to the temple, it is customary for devotees...
2019 / Nine Emperor Gods Festival

Haze Move Over! Dates for the 2019 Festival (Ampang Style)